One Night in Georgia 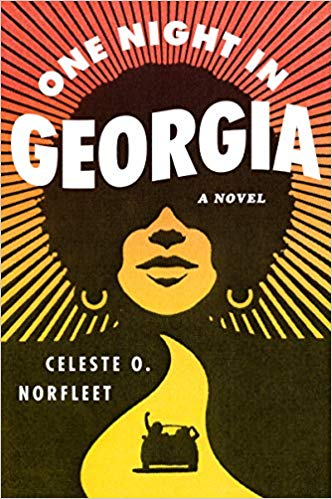 One Night in Georgia

At the end of a sweltering summer shaped by the tragic assassinations of Martin Luther King, Jr., and Bobby Kennedy, race riots, political protests, and the heightened prominence of the Black power movement, three coeds from New York City—Zelda Livingston, Veronica Cook, and Daphne Brooks—pack into Veronica’s new Ford Fairlane convertible, bound for Atlanta and their last year together at Spelman College.

Unlikely friends from vastly different backgrounds, the trio has been inseparable since freshman year. Zelda, serious and unyielding, the heir of rebellious slaves and freedom riders, sees the world as a dangerous place when you’re black. Veronica, the privileged daughter of a refined, wealthy family, strongly believes in integration and racial uplift. Daphne, of mixed race, lives with a legacy of loss—when as a child, her black mother committed suicide and her father abandoned her.

Though they are young and carefree, the girls aren’t foolish. They rely on the Motorist Green Book and Daniel, a not so welcome family friend, to travel safely. But when they hit Washington, D.C., trouble begins as well as an unlikely romance. Further south their journey turns terrifying—and deadly. When the car breaks down in Georgia, they find themselves caught up in a racially hostile situation that leaves a white person dead and one of the girls holding the gun.

ONE NIGHT IN GEORGIA REVIEWS

“Set against the tumultuous summer of 1968, Norfleet’s novel is a rich, devastating story of lives trapped in a violent period of history…”

“…Norfleet brilliantly depicts what it means to be a black female in a tempestuous period of American history, and provides a gripping narrative to boot.”  –  Publishers Weekly – Summer Reads 2019

One of “The 17 Best Summer Reads of 2019” by Harper’s Bazaar! “The personal has always been political—and vice versa—and in her new road trip novel, Celeste O. Norfleet tackles this theme head-on.”              Keely Weiss – Harper’s Bazaar

(A+) Award of Excellence: “Talented author, Celeste O. Norfleet takes her readers on a journey into the Deep South during one of the most turbulent times in this nation’s history.  ONE NIGHT IN GEORGIA is a riveting story that will resonate with your sense of humaneness long after you read the last page. Celeste O. Norfleet does an exceptional job in recounting that time through this work of Historical Fiction. I highly recommend this novel.″   Reviewed By: Brenda Larnell  –  Romance In Color Reviews

5 Whistles (loved it – left a lasting impression) “Once I started, I couldn’t put the book down. Author Celeste O. Norfleet did an exceptional job with this story. Her writing transported me back to those times where a copy of The Motorist Green Book was necessary if you wanted to travel while black. One Night in Georgia is on my list of Favorite Reads of 2019. I highly recommend this book!!”   Reviewed By: Orsayor Simmons  –  Book Referees

“…Norfleet’s origins as a romance writer show in the slow burn of Zelda and Daniel’s attraction, but it’s the female friendships that drive this heartbreaking novel of awakening. The deceptively breezy tone belies the hard truths of the story, making it a good fit for a wide range of book groups.” –  American Library Association’s Magazine Booklist

The Thrill of You ~ The Coles Family Award Winning Series

Sexy, magnetic Florida business owner and philanthropist Mikhail Coles is wrong for Cyanna Dupres in every way. And he’s the one man who can give her what she wants. Seducing the commitment-wary bachelor is the easy part. But once Cyanna wants a lifetime connection, will she lose the lover who makes her feel like the world’s most desirable woman?

Formerly Special Forces, Mikhail is haunted by demons he can’t shake. But Cyanna’s passion is taking him to thrilling new heights where anything is possible…even love. Called in on one final search-and-rescue operation-to find Cyanna’s missing brother-Mikhail realizes he wants more than a fleeting affair. Can he succeed in his mission and keep Cyanna safe so they can become the family she’s always wanted?

Catch up on the Mamma Lou Matchmaker Series on E-Books – Available NOW! 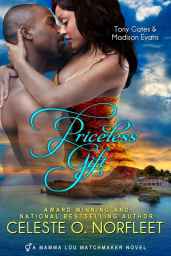 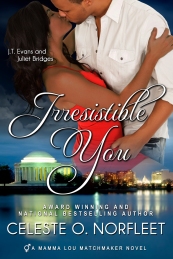 Book eleven of the Mamma Lou Series ~ Pleasure and politics collide with incredible results in a sweet and sizzling new novel in the Mamma Lou Matchmaker Series. Gia Duncan has turned her back on her family’s wealth in order to run a community organization. That’s why giving in to her desire for powerful, charismatic Keith Washington is a mistake she can make only once. Keith is the mayor’s campaign manager and son, a workaholic whose only goal is to get his father reelected. Gia knows he’s an opponent she can’t trust with her agenda, let alone her heart.

At first, seducing Gia is just a way to keep her from derailing his father’s reelection campaign. Until Keith starts to realize what everyone—especially matchmaker Mamma Lou—already knows. Nothing compares to the passion that keeps drawing him to Gia. But can he convince her that the only thing he truly wants from her is the promise of forever?

″FOREVER LOVE (4) by Celeste O. Norfleet: Mama Lou’s latest matchmaking adventure is set in the political world of Philadelphia — where politics can be a blood sport. But love can be found even in that environment. Smart, attractive characters populate this compelling treat.″

Some people stand back when problems crop up. Kenisha Lewis steps up. And there’s a lot that needs fixing, from her family’s money worries to the run-down dance studio where she works part-time.

When the promo she makes for a dance studio fundraiser goes viral, Kenisha can’t believe the response. Who’d have guessed she’d become the latest YouTube sensation—or be asked to star in a video with rapper Taj? And now, Taj wants Kenisha to become her protégée, promising money and fame. Problems solved, right? Not quite. Her exciting new career is taking time away from school, family, friends and her boyfriend, Terrence.… Kenisha is sure she’s this close to having what she’s always wanted. But how much is she willing to give up to get it?

Comments Off on One Night in Georgia